There is only so much images and renderings could do to communicate the visual impact of details at human scale. That is why the Centennial Park Pavilion team decided to carry out a mock-up of section of a 24-foot high wood ceiling that would be experienced by visitors of the Events Pavilion. In essence, the pavilion consists of eight offset columns within an 80’ by 80’ footprint, with a roof covering a 110’ by 110’ footprint twenty-four feet above the finish floor.  A central light monitor that is 30’ by 30’ introduces more light into the middle of the space. The design was clearly a simple and minimal one, which led the client to suggest if some aspect of “pleasure, delight, and happiness” could be introduced to potential visitors of the park through tectonics, color, and texture. The decision to play up the pavilion ceiling came with the aim to create a more interesting visual texture for the flat plane. In discussion with a local acoustician, the team believes that the textured ceiling might contribute acoustically to the diffusion of sound for the many different types of events that may take place at the pavilion.

The goal of the mock-up is to determine whether the angled 4x6 wood members that wrap the ceiling has enough of a visual impact at 24 feet above ground, as well as whether the ¾” gap between the wood members that reveal the red ceiling is appropriate. One of the objectives behind this design is to create an interesting ceiling plane while minimizing waste by using both halves of a sliced, thicker lumber, and reusing trees that are being removed from the site. We also decided to mock up how the gutter may be integrated into the ceiling as it directs water from the perimeter into a C-channel on each of the columns of the pavilion, further adding to the "pleasure, delight, and happiness" of witnessing and experiencing the flow of water down the columns. 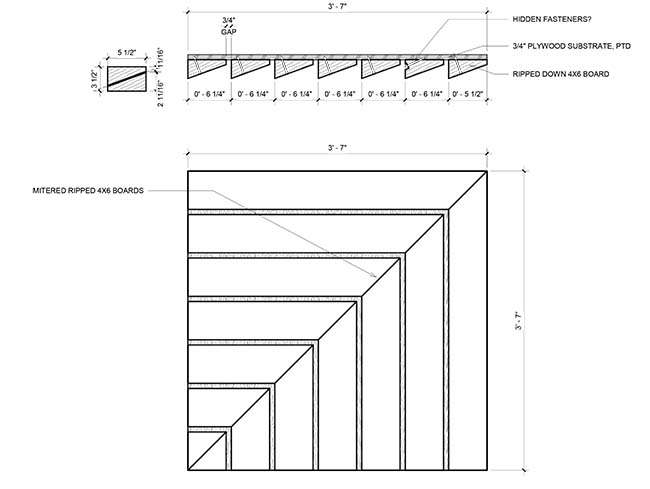 With Evan's help, we were able to go through steps of trial and error as we figured out the limits and strengths of the table saw and band saw. We discovered quickly that the maximum height of the table saw was not sufficient to cut the diagonal through the 4x6 at 20 degrees even after flipping the board over, as it still left ½” in the middle. The band saw, although took a while to cut through the whole 4’ lengths of 4x6s, almost worked well, but we soon noticed that the blade was being misguided by the wheels of the machine and the board pinching and rotating the blade, causing the cut to veer left. We found the solution to be a collaboration of the two blades, first with the table saw making angled cuts at both ends and using the band saw to finish of the 1/2” middle portion.

The cumulative weight of the plywood, along with 16 board feet of 4x6 pressure treated pine made it a real challenge for us to cantilever it over a platform 24’ above ground. It required two 2x4s screwed into the back of the plywood, with extensions so that Adam and Steven could step and put their weight on them, while pulling on a rope that is looped through a hole drilled through the 2x4s on the outer edge of the model. Even so, it was a remarkably difficult [and scary] feat standing on the back of a pickup truck and sliding the ceiling model through cable wires on the third level of Broadway 1221 parking garage, which turned out to be 29 feet instead of 24 feet above ground.

The results showed us that the sliced 4x6's provided enough depth to be noticeable from eye level and the ¾” red reveal turned out to be brighter than expected. The play of light and shadow might also be interesting along the angled faces of the board, and the team might consider a ceiling design with wood members at varying angles. Because the red is so subtle, painting the back faces of the sliced lumber might create a stronger visual impact.