Tags
Wellness
“Excellent learning environments are supported by high-performance design. Studies have reinforced and quantified what we have intuitively known – that student health and performance improve with well-designed learning environments, spaces that support student connectivity to each other, nature, daylight, fresh air, views to the surrounding community and natural resources, etc.  Early in the concept phase, our design and client team established a goal of having 100% of the school's learning spaces be daylight autonomous to support the educational and mental well-being of students, faculty, and staff. Establishing baselines and iterating quickly on design options using ClimateStudio were integral to our team's process in strategically locating glazing in smart and measurable ways specific to our desert location in Alamogordo – designing and balancing openings while minimizing glare across the school year.”

Lake|Flato strives to create restorative environments that reduce carbon emissions and enhance connections to the natural world. Lake|Flato’s work reflects the belief that sustainability and design are two sides of the same coin — balanced, integrated, and inseparable. They strive for a healthy, coherent, and place-based approach to building. To achieve these goals, Lake|Flato uses Solemma’s ClimateStudio early in their design process to perform iterative design simulations.

Located in Alamogordo, New Mexico, the school, as part of Alamogordo Public Schools, will host 660 students from grades 6 to 8 over an area of 87,000 gross square feet. The project goals include the creation of flexible facilities that stimulate student learning and raise academic performance by connecting the school to nature, daylight, and views while integrating healthy building systems and materials.

The local climate of Alamogordo, New Mexico is arid and experiences significant solar radiation. Using ClimateStudio’s database of over 30,000 climate files and its real-world glazing library, Lake|Flato designers tested design options under historical climate data of southern New Mexico to simulate in real-time how their choices in materials, glazing, and shading devices would impact the thermal and visual comfort inside the space.

The resulting high-performance learning environments are connected to nature and have significant learning benefits. Research shows they promote a 3.3x higher average test score gain in students, and in particular, classrooms with natural light explain a 16% positive variation in learning*. This blog focuses on Lake|Flato’s design of three spaces using ClimateStudio: a gymnasium, a northeastern-facing classroom, and a southern-facing classroom. 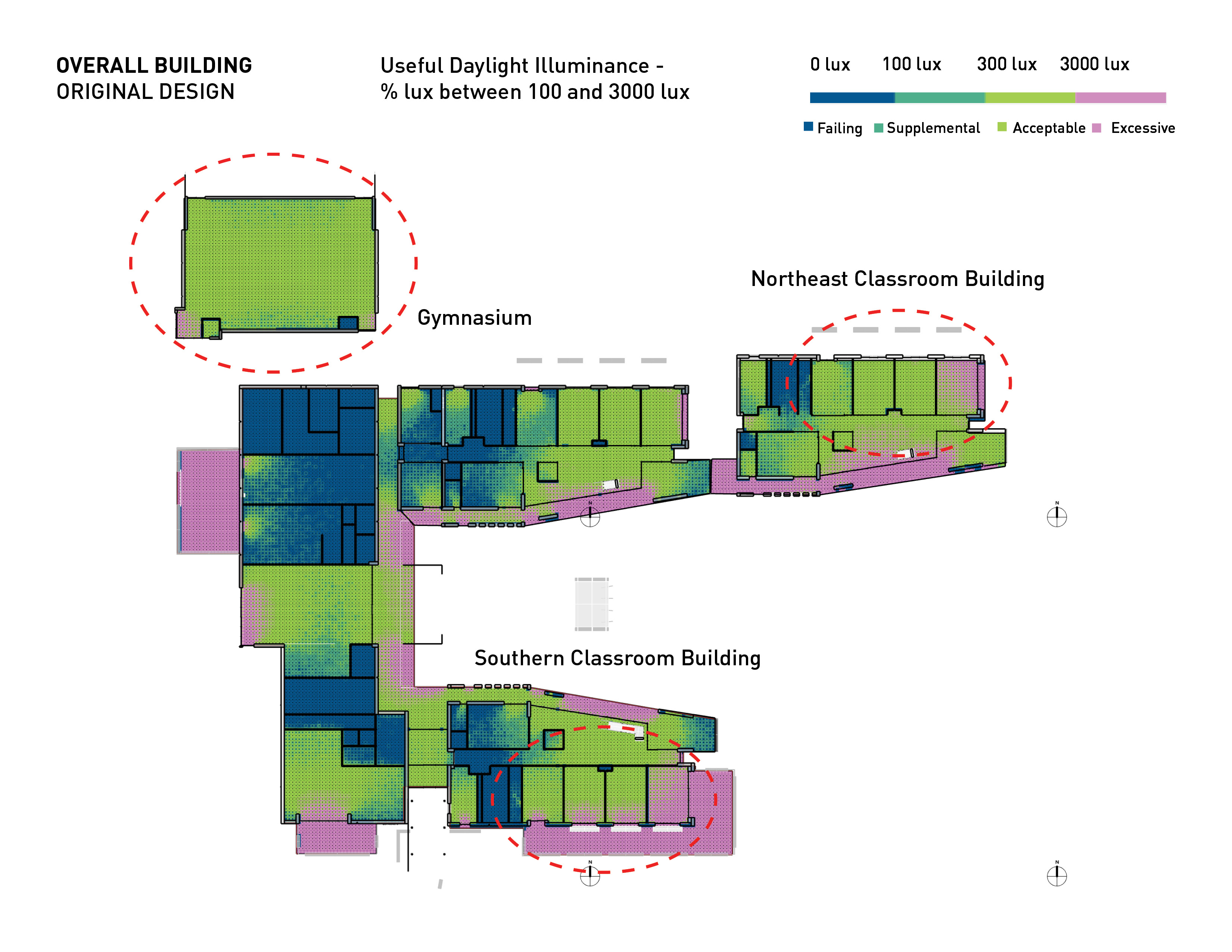 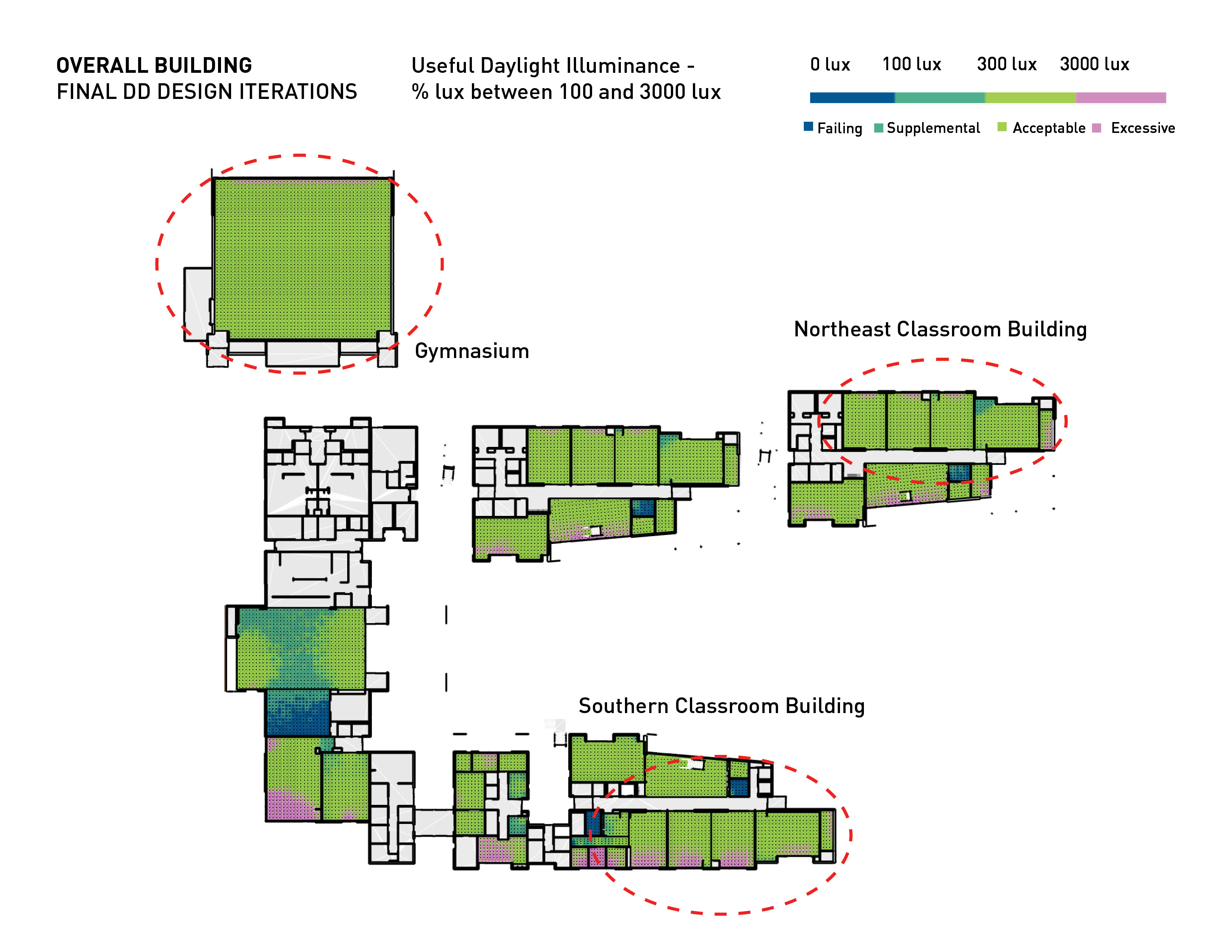 All projects at Lake|Flato begin with a site analysis that looks at solar orientation to identify which passive strategies are suitable according to the structure and surrounding local environment. The gymnasium, northeast classroom building, and the southern classroom building were evaluated for Useful Daylight Illuminance (UDI) (ideally targeting supplemental and acceptable levels from 100 lx to 3,000 lx) and Average Illuminance (with a target goal ranging from 300 lx to 500 lx).

Areas exceeding 3,000 lux are frequently considered problem areas for glare and solar heat gain. Annual Sunlight Exposure (ASE) was also used to analyze spaces receiving too much direct sunlight. By starting this analysis early, overlit and underlit hotspots were identified to be addressed in the final design.

The gymnasium designed for Alamogordo Middle School has a large north-facing curtain wall meant to maximize the amount of natural daylight in the space. In this initial design, horizontal and vertical perforated metal overhangs were included to reduce annual solar radiation. UDI and sDA values were compared between the design with overhangs, without the overhangs, and with setbacks. These simulations found minimal differences between the original design that included overhangs and the proposed setback options, as you can see below. 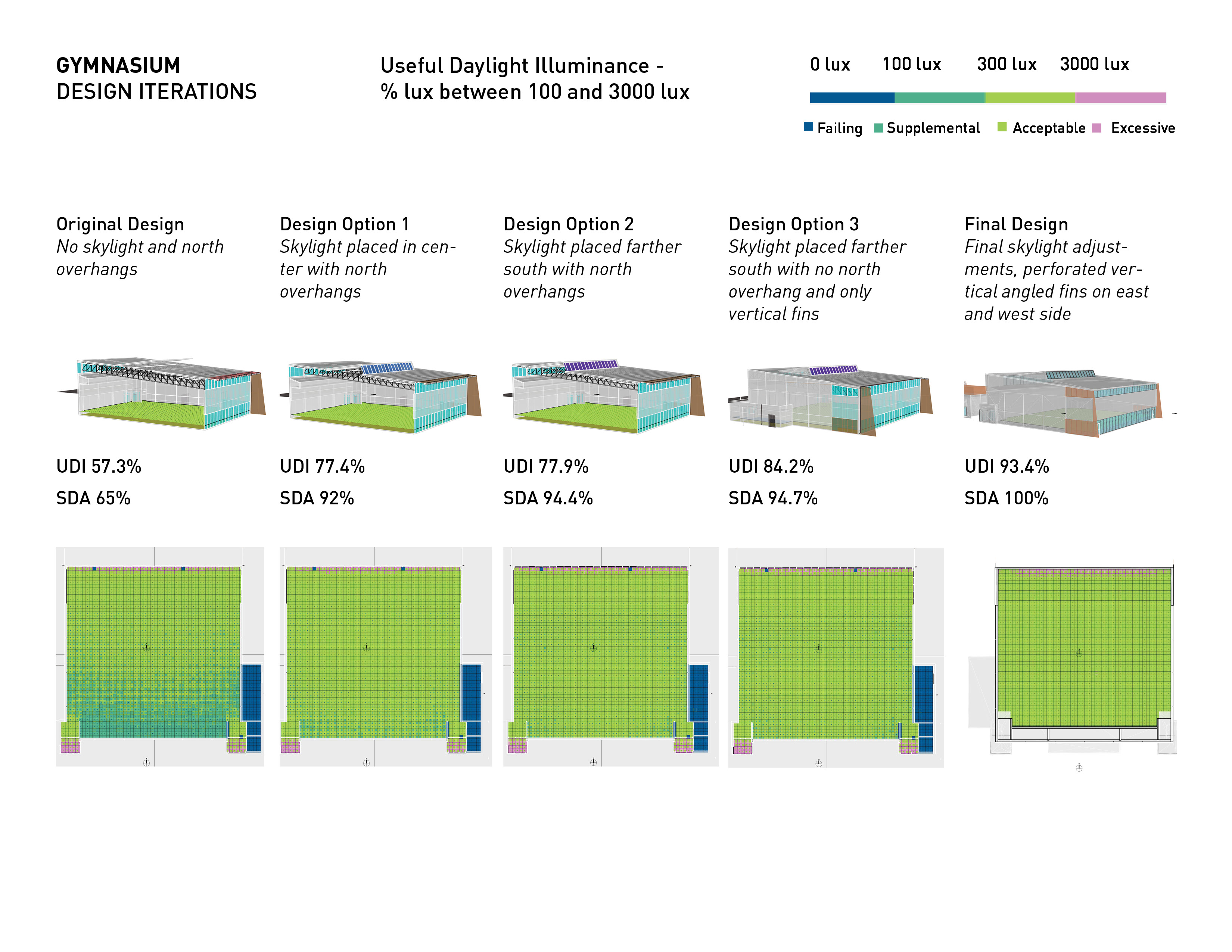 Progression of designs to maximize useful daylight for the gymnasium building at Alamogordo Middle School.

While overhangs help block excessive solar radiation, especially on southern facades, they were not needed on the northern facade, and thus Lake|Flato decided to remove the northern overhang and keep the east and west vertical fins to prevent ASE and glare. The next step in the iterative design process of the gymnasium was to select a location for a skylight so that 100% sDA could be achieved.

Using ClimateStudio, designers evaluated the best place to locate the skylight to maximize UDI and avoid glare. At first, the skylight was placed in the center of the room (option 1), but after performing the analysis, it was discovered the skylight should be pushed back to the south end of the gym (option 2) where light from the northern façade could not reach. This iterative design study resulted in a gymnasium that reaches 100% spatial daylight autonomy.

After analyzing the gym, Lake|Flato addressed the classrooms. Like the gym, the northeast classroom building has a large north-facing curtain wall which helps to bring in daylight while minimizing direct solar gain. However, after running the first analysis on the classrooms, it was discovered that the classroom on the far northeast was experiencing high levels of sunlight exposure due to the large, east-facing glazing. The design team went through multiple iterations to see how to best reduce ASE without compromising views to the east as seen below. Out of the options studied, the best option was to use a lower 50% VLT glass, reduce the WWR, and add a 2’ overhang. 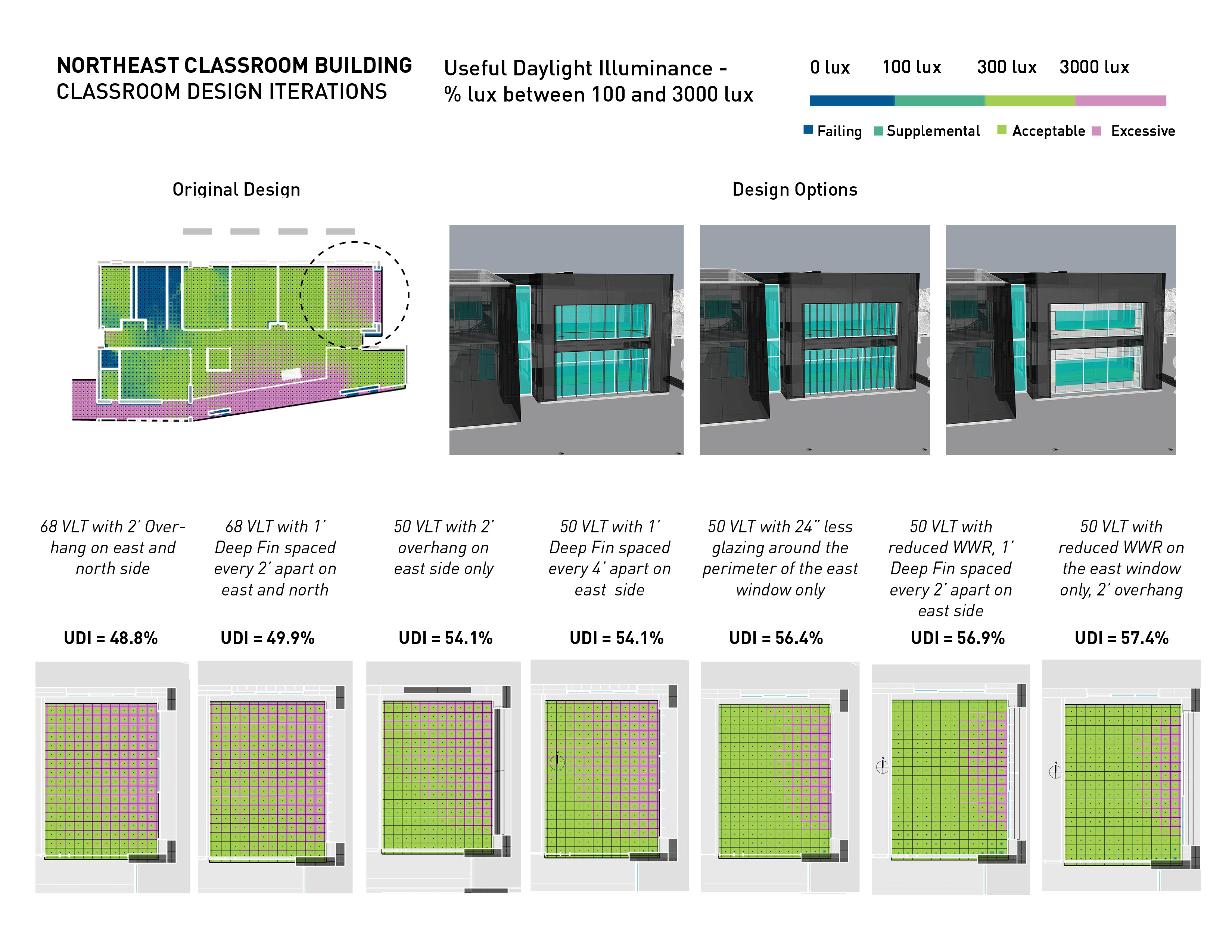 Progression of designs to maximize useful daylight for the northeast classroom building at Alamogordo Middle School. 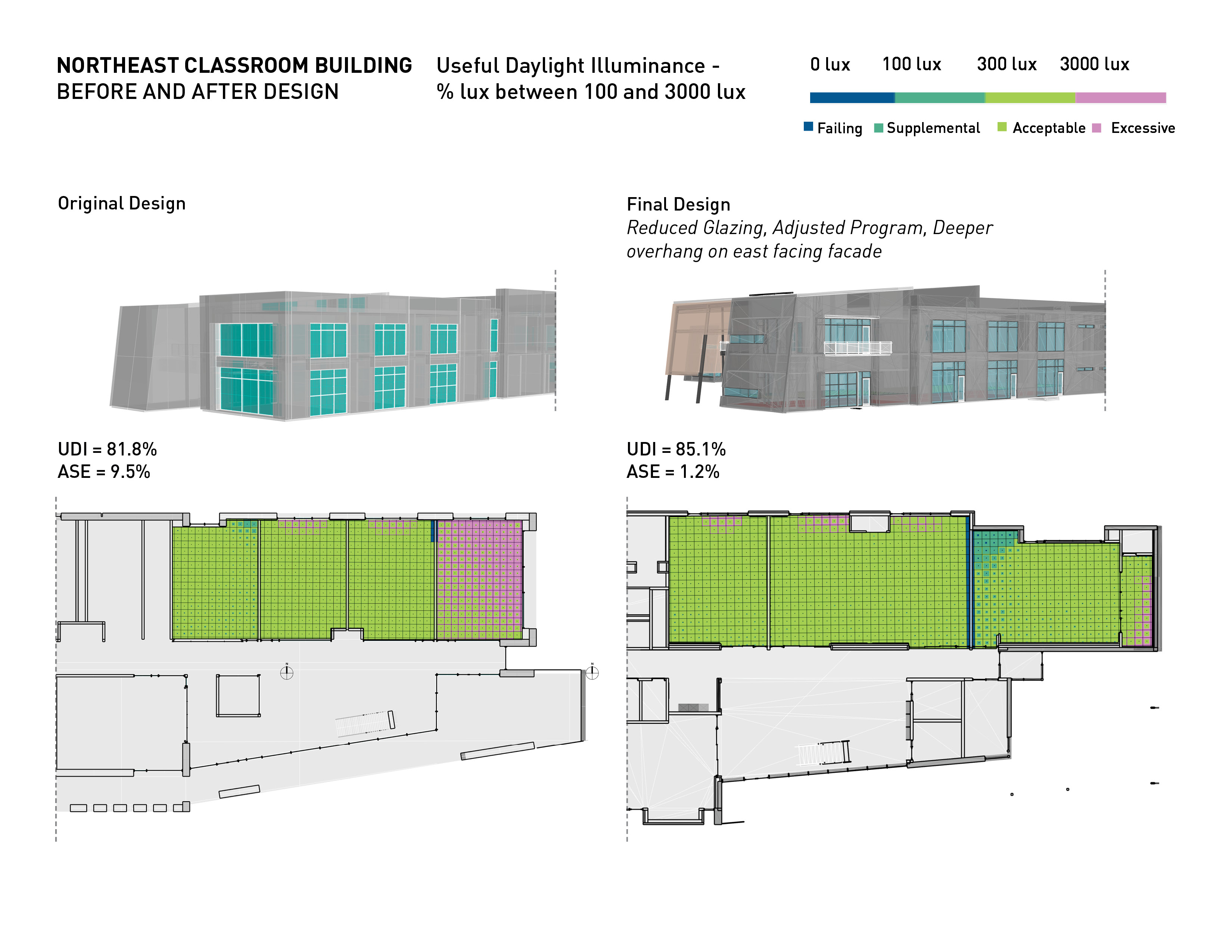 Before and after designs of the northeast classroom building at Alamogordo Middle School.

After considering multiple design iterations to reduce ASE and still reach the goal of 100% sDA, the design team decided to take an additional approach which involved adjusting the program to locate the small lab prep room on the east side and reduce the WWR. These two design strategies helped to drastically drop the ASE to 1.2% and improved the UDI from 81.8% to 85.1%, bringing the total sDA to nearly 100%.

While the overhang did not fit the gymnasium building, it was the right fit for the classroom buildings. In particular, the south-facing classroom building had initial issues with high sunlight exposure (ASE = 24.5%), especially in the southeast classroom, indicating instances of significant direct sunlight. The first design strategy was to test various overhang options. Although this helped reduce the overall ASE from 24.5% to 16.5%, the southeast classroom was still being hit with substantial direct light throughout the year. 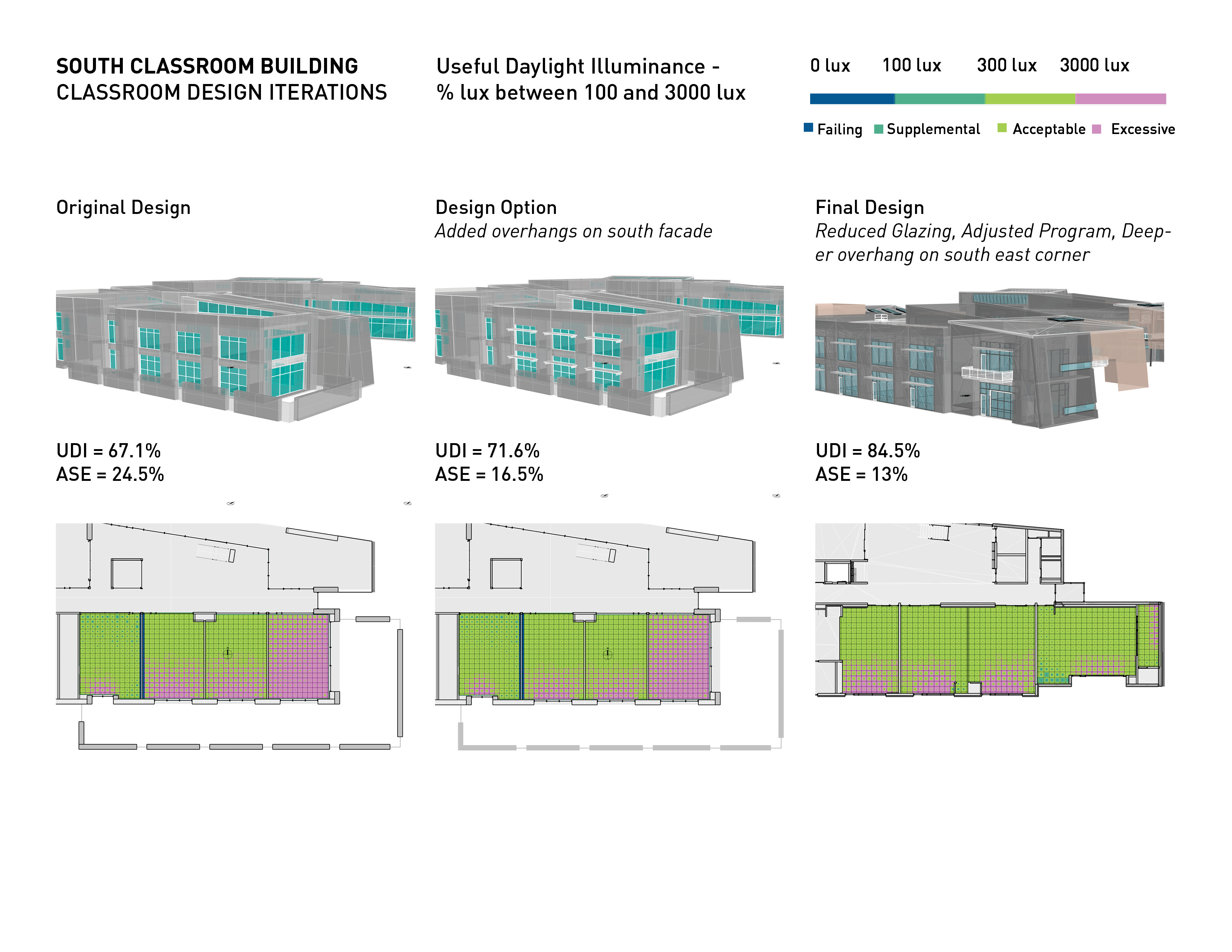 The design team took the same approach as the northeast classroom building and adjusted the program to put a small lab room on the east side, reducing WWR and adding a deeper overhang on the south side. These design strategies further reduced solar exposure, improved the UDI from 71.6 to 84.5%, and brought the total sDA to nearly 100%.  Additional design iterations will be explored to reduce overlighting shown in the south-facing classrooms.

Alamogordo Middle School is set to have construction completed by Fall 2024 in collaboration with Studio Southwest Architects as the architect of record. Not only will all the spaces have nearly 100% daylight autonomy, but the school is also pursuing WELL Certification which recognizes buildings that make a positive impact on human health and wellbeing through light, comfort, air, water, nourishment, and mind. Using ClimateStudio early in the design process, Lake|Flato and other architectural firms have a leg up when it comes to achieving their sustainability and comfort goals.

Note: This blog post was written in collaboration with ClimateStudio and is also hosted on the ClimateStudio website via this link: Lake|Flato designs High-Performance School using ClimateStudio — Solemma