A peculiar but welcome phenomenon exists at Lake|Flato: We are home to the highest concentration of architectural interns named "Josh" in the City of San Antonio. I sat down with Josh Nieves, Josh Leger, and Josh Lamden (also known around here as J1, J2, and J3, respectively) to talk about their experiences as interns at Lake|Flato. Read on to find out what other similarities (and differences) exist between this trio. What is your full name, your hometown, and how many years have you been at Lake|Flato? Josh Nieves: Hopewell Junction, NY; a little over 2 years. Josh Lamden: Mill Valley, CA; 0.1 years. Josh Leger: Fountain Hills, AZ; 1 year. What projects are working on? What projects have you worked on? Nieves: A lot. Horse Valley, Willowick, Stratford Hills… Lamden: Ulery’s Lake Camp and a little bit with Granby and that’s pretty much it. Leger: I’m working on MT7, Dale Outpost, Pendleton, which are all in CA, and Clinton Corners, which is in between CD and CA, and general Porch House stuff. Do you have a favorite project that you have worked on? Nieves: When I first started, I helped with CDs for the motor gate for Hog Pen Creek. And it actually got built. I didn’t do much, I only doodled some bolts and stuff on it. But because it was built, I think, is why it’s my favorite. Lamden: My favorite… I’ll be diplomatic and say they’re both awesome (Ulery’s and Granby). Leger: I’d say Clinton Corners is going to be a really cool house just because of the factory that we’re working with, but Dale Outpost is my favorite… just because I spent the most time on it. Describe your experience as an intern at Lake|Flato. Nieves: I’ve gotten to work on a lot of different projects at different stages and the longer I’ve been here, the more trust I’ve gained, so I’ve been given more responsibility. Lamden: I’ve only been here a month, but I think just the opportunity to work on a project from pretty much start to end of DD, which is where we’re taking this one, is pretty cool. Just in 6 months to get to work from more or less start to finish of the project’s life at Lake|Flato is pretty cool. Leger: I would say the first month or two was really slow just because you don’t have a steady project, but then it builds really quickly once you get a steady project and then [snaps fingers]… especially the past two months, one month, since Rand left, its been a little hectic, just picking up that slack, but it’s been good. And now I’m coming to a bit of a lull here just because I’m leaving soon.

What is (are) your favorite thing(s) about being an intern at Lake|Flato? Nieves: Hanging out with everybody. It’s like a family; lots of friends. Sometimes it’s fun doing brainless tasks like moving stuff around in the basement. Lamden: Again, I’ve only been here a month, but I think there’s been tons of fun things to do outside of work like Trivia Nights at Halcyon, biking, Happy Hour. Then in the office I really like the Peanut Galleries and the 369s; I think those are really cool. To be part of a bigger firm where there’s tons of projects going on and you can see what’s going on – even though you’re not working on it. And sitting next to this guy [points to Leger], but I moved. Leger: Working at Lake|Flato doesn’t totally take over your life. Well, it kind of does, but you can still have your own life outside of work. There’s a work-life balance even for interns. It’s fun watching the front desk too sometimes. Talk about the communal nature of the intern group at Lake|Flato. Nieves: I feel like we’re a welcome committee for anybody coming to the firm because you have new people show up and they don’t know anybody and since we’re all kind of new they just absorb into us and they hang out with us until they find full-time friends. Being here for over two years, I’ve been through a lot of generations of interns, and every group has similarities and differences. Lamden: It’s pretty cool – everyone is from all over. The fact that Hayley and Kaitlyn are from Canada. Everybody is a different age, has different experience, different background. Everyone is nice and friendly. We learn from each other. Talk about some of the activities you’ve participated in outside of the office. Nieves: You can go to Big Bend, or go to Marfa, hiking all over the place, dinosaur footprints at Government Canyon, Pedernales Falls – that one is my favorite. Lamden: Also, after work, the Grackles and the Zoo Run and stuff like that. Leger: A few of us went to the Frio River and floated on it – that was fun. Usually after work on Friday there is a group that gets together and goes to a Happy Hour somewhere. Share some memorable moments you’ve had during your time here. Nieves: Flake|Lato is always fun. The Big Bend trip. Lamden: I’ll say tomorrow, when it will be Bike for Breakfast. 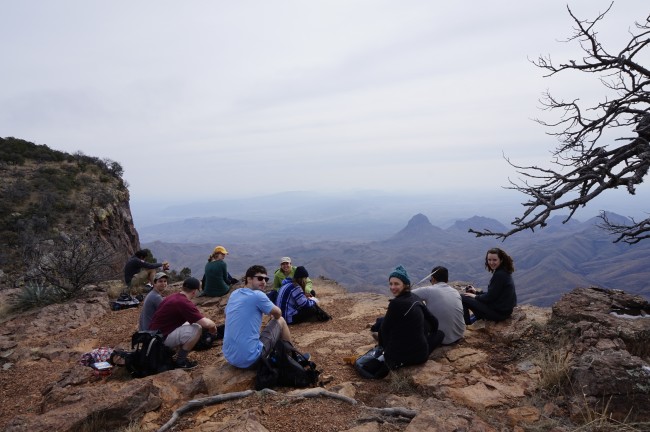 A group of interns (including two Joshes) at Big Bend
What could an intern coming to Lake|Flato expect from their time here? Nieves: You’ll definitely have a good time; it’s not boring. Lamden: You’ll be an integral part of a project team. Leger: It’s a fun place to work. You’ll play a pretty big role on your project team. You feel like you’re a part of the conversation rather than just producing work. What advice do you have for other aspiring architects at your level? Leger: Go after what you want. I applied to two places: Lake|Flato and a place in Phoenix. Lake|Flato was the place I wanted to work and it happened to work out, but if you don’t take that first step, you’ll never get to where you want to go. What have you learned during your time at Lake|Flato? Nieves: You learn to ask questions because everyone else knows more than us. Lamden: I feel like in school they’re always saying “school is all collaborative” but I don’t think it is and I feel like the firm is way more collaborative than you ever are in school. Leger: You learn a lot about how the business of architecture works and how to actually make a building instead of just “think and draw” a building. There are a lot more constraints than in school; a lot more forces at play. One skill I’ve learned and will probably keep learning is how to talk to consultants. You never get that in school. What are your future plans? Nieves: I’m going to Canada for grad school. Lamden: Finish the run of eight years of school. Leger: I’m going to UT-Austin for grad school.
Tweet
Go Back