On September 30, 2015, the Josey Pavilion completed its one-year performance period as a net zero energy building, generating 50% more energy than it consumed. During the performance period, Josey consumed 2467 kWh, generated 3697 kWh, and sent a net of 1230 kWh back to the grid. From the beginning of the design process, the Josey Pavilion was conceived as an open air pavilion. Whether it’s 40 degrees in late November with a 20 miles per hour wind sweeping across the prairie or 102 degrees in August, a successful design would allow seasonally dressed occupants to comfortably spend a few hours in the pavilion listening to presentations or meeting in the herbarium. 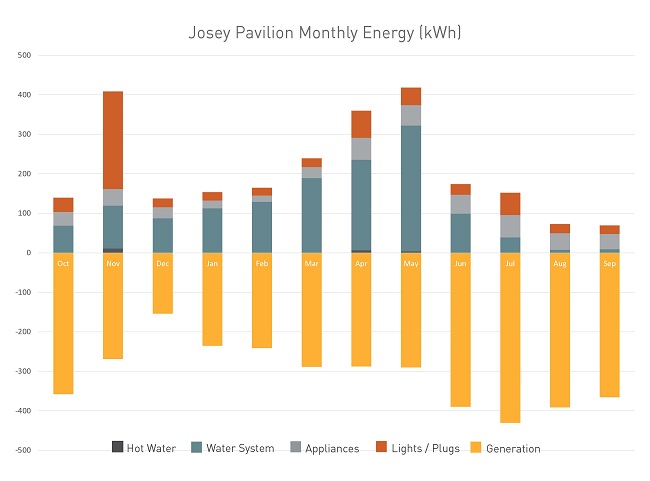 The pavilion can completely transform from an enclosed shelter in the winter to an open air shade structure in the summer. The main pavilion is oriented perpendicular to the prevailing winds and three sliding door panels on each long side can be closed to block the wind or open to allow a breeze. The building is successful, not because it saves energy by not using air conditioning, but because it keeps its occupants comfortable throughout the year while using almost no energy. 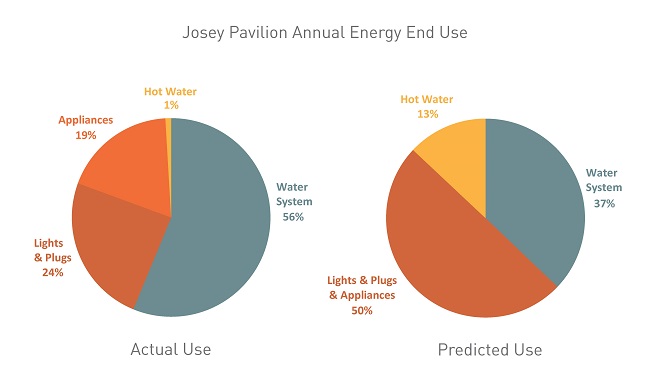 The systems that do use energy, hot water, lighting, plugs, equipment, and appliances were all designed to be as efficient as possible. For hot water, we chose a point-of-use instant water heater under the kitchen sink. Since occupancy is intermittent, the tank does not need to maintain a constant water temperature though the summer and winter. The hot water system is so efficient that it uses 90% less energy than what was modeled. 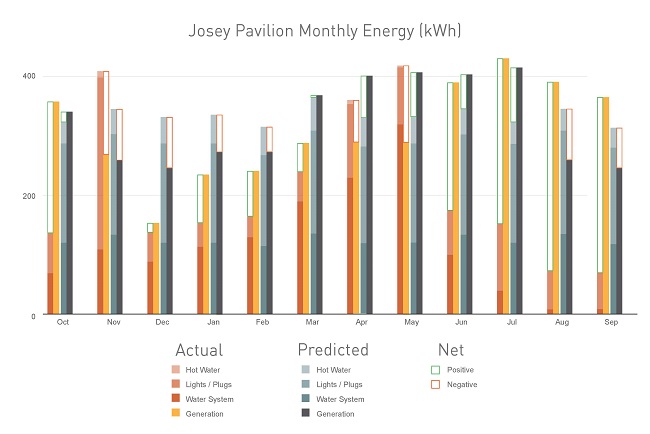 Lighting is mostly LED and a system of timers and controls prevents the lights from being on when the building isn't occupied. Kitchen appliances, refrigerator, oven, and range hood were similarly chosen for both efficiency and limited use. The big unknown when planning for energy use was the waste water system. This system of pumps and filters has varying run times based on occupancy and rainfall, two big unknowns at the beginning of our occupancy period. Because of this, we monitored the building's energy frequently and made adjustments to save energy when possible. As spring turned to summer and rain turned to drought, the waste water system pumps ran much less frequently, allowing the project to finish its occupancy period firmly in net positive territory. 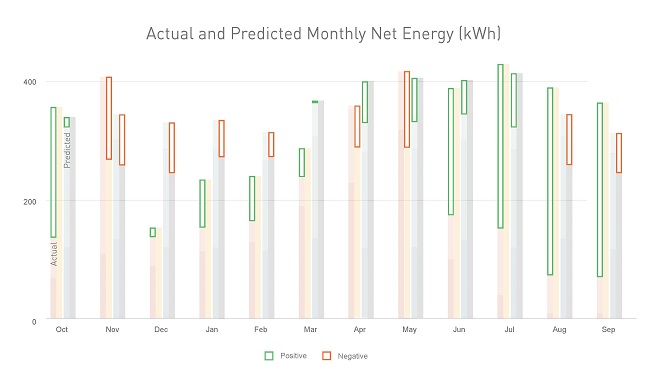 The final piece of our energy strategy is our 4kW solar array to offset the energy use. The system is grid tied to take advantage of the storage capacity of the grid, and in its first year generated 3697 kWh, enough energy to power a Josey Pavilion and a half.   Limit energy Use it only when needed And watch where it goes…
Tweet
Go Back