As I have begun my professional career at Lake|Flato by administrating the construction of one of the largest and most complex projects in our firm's history, I find that it is both entertaining and necessary to share what it has been like for a young designer to jump from the pond of architecture school into the deepest ocean of architectural reality.   My first day at Lake|Flato was equally overwhelming and wonderful – I still remember each (at the time) unfamiliar but exceptionally friendly face as I was paraded through the office to each and every desk.  In the midst of these introductions to my new LF family, I was repeatedly asked very normal and insightful questions such as “where are you from” and “where did you go to school,” and I answered accordingly:  “I am a Deep South, Mississippi native, and I graduated from Mississippi State University.”  Conversation typically continued, including details of the whirlwind that was my early summer – graduating from college, getting married, honeymooning in the Rockies, and then moving to Texas, all within four weeks.  Enthusiastic responses such as “oh wow!” or “you must be pretty tired!” gleefully followed suit… However, as I continued to make my rounds up and around the three floors of 311 Third Street, I began to gauge my response to one question in particular that seemed to consistently conjure the most emotion. Most People Meeting Me for the First Time:  “What project will you be working on?” Me:  “Construction administration on the Austin New Central Library." Silence. Eyes widened, and eyebrows raised. Smiles got bigger, and heads tilted. 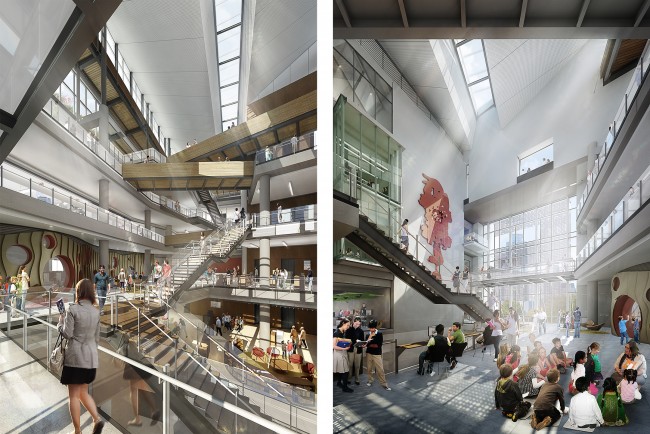 I was certainly aware that the Library was a large and complex project (from what I had gathered online in the images above), but I truly had no earthly idea how complicated and large this building actually was – apparently most everyone else had some inclination.  In not even yet comprehending the fact that I was now tasked with managing the construction of this beautiful behemoth, my brain was officially reeling in panic.  Curiously, this moment of terror was exactly that – just a moment.  The end of this anxiety ironically coincided with the instant I met my project team, Jonathan Smith and Daniel Lazarine – CA veterans extraordinaire. As we casually conversed about my Mississippi roots and hectic summer, I couldn’t help but notice how completely calm and composed these two people seemed to be, despite knowing that their professional lives were engulfed in a flood of construction complexities.  In that moment, for no logical reason other than osmosis of the cool and calm attitude of my new project team, I told myself that I was ready for the challenge.  Even if I had absolutely no idea what I was doing (which I would soon find all too true), I would convince myself that I could do it – I would simply learn, and learn quickly. Over the course of the next month, I must admit that I deeply surprised myself at how rapidly I began to not only comprehend but eventually contribute to the Library Team's causes.  For example, even though I technically volunteered to do so, being handed a 300 page Finish Hardware Submittal was particularly terrifying - however, within three weeks of wading through the intense technicalities of the hardware world, I found myself leading a conference call alongside industry experts - and actually solving real problems.  I have never been more challenged to not only look for but solve problems in a realm so completely foreign to me. As arduous as CA has been for a designer who has yet to actually design a building, I feel like I have learned more in the past four months at Lake|Flato in being pushed into the deep end of reality than ever before in my life.  At the heart of this experience, however, has been that ever-steady calm and cool voice of my project team, reminding me that no matter how many pages of finish hardware product data may come my way, at the end of this journey a beautiful, revolutionary building will stand for decades to come because of our collective efforts. Go Library Team!